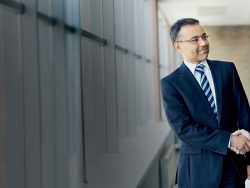 Sage Advice for Getting to the C-Suite

I am often asked for advice on the best career path to becoming a hospital CEO. While I encourage people to set “Big Hairy Audacious Goals,” I am also quick to point out that only a few make it to the top. I want to share the journey to system CEO of a truly inspirational and effective servant leader.

Almost 20 years ago, I placed this leader in a Director of Planning position, which required him to relocate, leaving his family behind. Yes, he had to be persuaded, but calculated that it was a risk worth taking. Today, as CEO of a multi-hospital system, he graciously shared several key attributes that he believes influenced his non-traditional career journey. Six of my favorites are discussed below.

1. Abundant and quality interpersonal relationships – “Skills and talent can be learned, “ he said, “but the ability to develop and nurture trusting relationships, to communicate effectively with others, whether physicians, patients, colleagues or family, are undeniable qualities.” In his daily interactions, he demonstrated a genuine interest in getting to know people by listening, questioning and engaging them frequently and appropriately.

2. Determination and stick-to-itiveness – Have a clear vision of your goals, persistently pursuing them no matter the roadblocks or disappointments. For example, leaving his family behind to relocated for the right opportunity was very difficult. This was further compounded by the fact that they had difficulty selling their house, but he remained focused on his goals, taking advantage of every opportunity to increase his visibility and credibility by learning the business and always finding ways to add measurable value.

3. A quest for knowledge – He understood that knowledge is power. As a planner, he recognized the importance of managing the P&L. He intentionally worked closely with the Operations team; helping even with the execution of the plans, thereby gaining a better understanding their challenges; and learning to speak their language. He also pursued and obtained a doctorate degree which further enhanced his capabilities and credibility.

4. Patience and willingness to be coached for growth – Learn from the pros, and grow and develop unquestionable business acumen to ensure success. His promotions could best be described as “preparation meeting opportunity.” Trusting in his capabilities and character, one of his bosses created a position that gave him expanded operational responsibilities, significantly increasing his span of control beyond traditional marketing planning roles.

5. Bottom-line performance – Understand the strategic imperatives of the organization; be a problem solver—strategically identifying critical gaps and taking steps to accomplish them. He moved the needle in areas that impacted quality, costs, patient/employee satisfaction, profit, operational efficiencies, and most importantly, he equipped and empowered his teams. “When people feel empowered and appreciated,” he shared, “they will go out of their way to make you successful.” He used suboptimal performance as a teaching opportunity—the Socratic approach, he calls it. Essentially helping people discover the answers themselves so they feel a sense of having contributed. He cautioned about working on too many activities that are not measurable.

6. Executive presence – Exude poise and elegance without arrogance; have a sense of self and purpose—a moral compass and a value system of honesty and trust that guides your actions. Finally, not being a self-promoter but instead, let others do the promoting for you.

While the road to the C-suite can take different paths, there is consensus that it must be carefully crafted. You have to be patient and be willing to be coached and mentored; and you must put forth the effort to learn “the ropes,” in order to be prepared to seize the opportunity when it arises.

Have a topic that interests you? Write to us at dsearch@desirgroup.com; we would love to hear from you. For further questions and comments or to join our mailing list, visit LeadershipBrief.com.