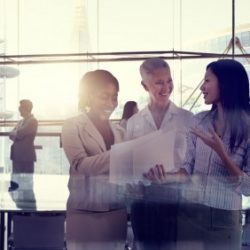 In today’s economy, healthcare organizations have to be very careful when considering who to hire for management and executive level positions. Today’s environment beckons those who can accomplish the organization’s goals within shifting priorities and team compositions. Not only must an applicant have the right leadership competencies and educational qualifications, they must also embody a unique set of values that justifies filling those positions.

Desir Group Executive Search helps hospitals, health systems and other healthcare facilities identify and recruit the right diverse candidates to complement hospital executive teams. “Hiring the right candidate can have a big impact on the bottom line,” explained Etheline Desir, president. “That person will more likely have a longer tenure, so the company doesn’t have to repeat the search in a year or two. That executive will also help to mentor and groom other minorities for leadership positions, establishing a pipeline within the organization so that they no longer have to go outside when hiring.”

“Because this person will understand the culture, values and strategies of the organization, they will have a vested interest in reaching out and bringing in the right people,” she added. “And simply by being in an executive level position, they are likely to motivate and inspire employees at lower lev-els of the organization, who will feel that they, too, can achieve that level of success.”

According to Desir, minority candidates often bring a significant breadth of experience to executive level positions. “Most minorities have received their training from the ground floor up; they have been tested as supervisors, managers, directors and/or vice-presidents before ever applying for that senior level position,” said Desir.

“A large number of minority candidates also have a wealth of experiences working in urban, rural and suburban environments,” she added. “They have learned how to work effectively with diverse personnel – often-times where resources are scarce.”

This is especially important as healthcare population demographics continue to change. In addition to serving a more diverse patient population, more minorities are attending college, entering the work-force, and looking at healthcare as a viable career. “Healthcare is going through a major transition in that throughout the country, most senior leadership falls into the Baby Boomer category,” said Desir. “These people will be retiring in five to 10 years, which is going to leave a huge gap at the executive level if organizations are not ready to replace them.”

“Most minorities have received their training from the ground floor up; they have been tested as supervisors, managers, directors and/or vice-presidents before ever applying for that senior level position. A large number of minority candidates also have a wealth of experiences working in urban, rural and suburban environments. They have learned how to work effectively with diverse personnel – often-times where resources are scarce.” – Etheline Desir

Finding candidates for these positions presents unique opportunities and challenges. “Generation X and Y are of a different mindset, and this goes beyond race and gender,” Desir explained. “Diversity is very inclusive in that it also means people who think differently – the culture and expectations of this younger generation are very different from those of Baby Boomers.

“This requires senior leaders to think of diversity from a broader perspective,” she added. “They need to change their mindsets to accept the new realities of the workplace. They will be hiring people from different social and ethnic backgrounds who have a different way of thinking; who can accomplish the same tasks but in a different way than it’s been done before.”

To help healthcare facilities find the right people, the Desir Group employs the “Finder-Keeper Strategy” in which they qualify the right candidates, make sure that they will ‘fit’ with an organization, and help that candidate assimilate into the organization and the community. “Our hiring process is extremely thorough and today, we have to be even more so,” said Desir. “Because we are so well-networked, we can identify qualified candidates from all over the country who meet the search criteria.”

Their staff conducts a one-hour phone interview with each qualified candidate and then pares down the list to include about 10 candidates who fly in for a three to four-hour, face-to-face interview. The client will then interview the best three or four candidates before making a decision.

“Evaluating for fit is critical in the selection process,” said Desir. “Since the lack of fit is often the reason for failure on the job, we probe much deeper, going beyond the typical interview scenarios and questions to get a sense of the candidate’s core values and character traits. Similarly, it is important for us to ensure that the organization is ready to bring diversity to its executive leadership team – is there a culture of acceptance from the top down?

“We also find out what the candidate needs to feel comfortable, especially if they are moving to a new setting,” she added. “Will they be accepted into that community? How well will their children fit into the school system? By making sure that there is a support system on the job and in the community, we ensure that both the client and the candidate enter into a win-win situation.”