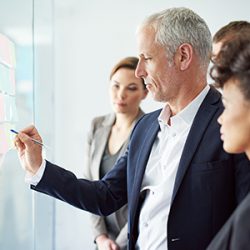 Servant Leadership: The Apex of the Third Paradigm in Leadership Thought

by Dr. Justin Thompson, founder and CEO of 2Xalt, Inc.

There are three key paradigm shifts in modern thought leadership that are important to consider. In the first paradigm, leadership was thought to be granted to a select few by birthright. It was believed that those who were born leaders were meant to take responsibility, and those who were not born leaders were incapable of accepting responsibility, were generally lazy, preferred to be told what to do, and would not perform unless forced to do so.

In the second paradigm, the negative view of ‘most people’ began to fade. The possibility that negative behavior and performance was, at times, the result of poor leadership, rather than insufficient negative consequences, began to gain popular acceptance. It was no longer assumed that a ‘big stick’ was required to motivate the troops. Instead a ‘good carrot’ that meets the more basic social and psychological needs, and an inspiring mission, were acknowledged as even better motivators. However, the ‘born to lead’ assumption was still pervasive in that it was still a given in leadership thinking that one is either born with the traits needed to lead, or one is destined to be a follower in all situations.

In the third paradigm, leadership is no longer viewed as solely the purview of those inheriting the birthright. In other words, leadership is viewed as learnable behaviors rather than inherited traits. This isn’t an assumption that we don’t inherit certain strengths and weaknesses, but rather that we can learn to capitalize on our strengths and compensate for our weakness to enable us to be better leaders.

This path in the evolution in leadership thought leads us directly to the concept of servant leadership.

The term ‘servant leader’ was coined by Robert Greenleaf who stated [servant leadership] “begins with the natural feeling that one wants to serve, to serve first. Then the conscious choice brings one to aspire to lead (Greenleaf).” The concept of servant leadership is far older than Mr. Greenleaf’s writings. In the early first century AD, Jesus taught His disciples that leaders must behave as servants when He stated “let the greatest among you become as the youngest, and the leader as one who serves (Luke 22:25-27, ESV).” Going back another half-century (c. 500 BC) Lao Tzo is quoted as saying “the highest type of ruler is one of whose existence the people are barely aware … The Sage is self-effacing and scanty of words. When his task is accomplished and things have been completed, all the people say, ‘We ourselves have achieved it (Tzu 35)!”‘ A few millennia further back in history, Moses was called to serve his people by confronting a dictator and guiding them out of slavery (Exodus 3).

What is Servant Leadership?

Let’s start by looking more closely at the meaning of the word “servant.” When people cringe at the mention of servant leadership, they often do so because they have a mental picture of the leader being browbeaten and overrun by a team or organization that has no discipline and is forcing their will up the hierarchy. They are painting a picture of anarchy where the supposed leader is just there to fetch coffee for the team. I would cringe with that mental image as well, but that is not servant leadership. In fact, it’s not leadership at all.

Rather than conjuring up such visuals of slave labor and anarchy, allow yourself to see a servant simply as one who serves. Then the question becomes whom, or what, is the servant leader actually serving. There are many different interpretations and definitions available in literature today. My definition for servant leadership is really quite simple: a servant leader is one who leads in order to serve, having a heart to serve, to make a positive difference; and one who defines the order of priority for serving as a purpose or cause first, then an organization, a team, and ultimately individuals. This service is the primary motivator of the leader who leads in order to serve the cause, the organization, the team, and the individual people.

Consider the design intent of the government of the United States. The founding father’s designed a system in which the government was for the people (leaders that are to serve the people), and by the people (put in place through an election process). Although I would not dare suggest that all those in public office in our government actually view their role as a servant of the people, that is the design intent. Every elected official, from the city Alderman, to the President of the United States, holds an office with a job description that includes serving. These are leaders, and the office that they hold is designed to serve the people. Some in history have served well, others have played the part in order to abuse the power afforded to them by the office.

With this priority of service in mind, it is important to note that the servant leader desires to serve the individual in such a way as to empower them to be all that they can and desire to be. The servant leader serves the individual by working to ensure they have the resources needed to optimize performance and satisfaction, and the freedom to use their experience, ingenuity, and logic to think outside the box as they serve the cause. The servant leader combines a strong focus on results – achievement of objectives in service to the cause – and a strong focus on the people – service to the individuals that make up the team and organization.

In an article in the Harvard Business Review, Matthew Lieberman discusses the relative importance of a results focus or a people focus. In this article he shares research showing that “results oriented” people were seen as great leaders by 14% of 60,000 employees surveyed, and those with strong social skills were only perceived as great leaders by 12% of the people. The “ah-ha” moment comes when considering leaders with both a strong focus on results and good people skills. Mr. Lieberman notes for ” … leaders who were strong in both results focus and in social skills, the likelihood of being seen as a great leader skyrocketed to 72% (Lieberman).” The scary thing is that most “bosses” aren’t like this. Mr. Lieberman continues to share another piece of research that indicates less than 1% of business leaders have a strong focus on both results and people.

“Leaders must embed their own sense of purpose into the heart and soul of every follower. … Great leaders inspire every follower at every level to internalize their purpose, and to understand that their purpose goes far beyond the mere details of their job.” – Colin Powell

The truth is that most people are naturally drawn to either a results focus, or a people focus. Very rarely (if ever) does one individual have a natural talent for both. Additionally, Mr. Lieberman points out that our brains are wired such that when we are actively focused on results, our ability to focus on people is diminished – and vice versa. This isn’t opinion, guesswork, or hearsay. It is scientifically quantifiable and verifiable fact that Mr. Lieberman refers to as the “neural seesaw” (Lieberman).

What does this mean for the servant leader? It means that to be great leaders, we must develop both a strong focus on results and good social skills that allow strong communication, conflict resolution, and a sensitivity to concerns or social impediments to high team performance. We aren’t likely to be naturally strong in both areas, so we’ll have to be extremely intentional at developing skills and proactively putting them into action.

When a leader’s motivation is fueled by a desire to serve a particular cause, and a desire to serve those that show a similar passion for the cause, the behavior of the leader will be different. Ken Blanchard said, “The most persistent barrier to being a servant leader is a heart motivated by self-interest that looks at the world as a “give a little, take a lot” proposition. Leaders with a heart motivated by self­interest put their own agenda, safety, status, and gratification ahead of those affected by their thoughts and actions (Blanchard and Staff 258-259).”

Being a Servant Leader

The heart of a servant leader is passionate about purpose and recognizes the value of every individual contributor to that purpose. He, or she, will find ways to make sure every contributor understands the value they bring to the team (more importantly, the value the leader sees in them). Colin Powell is a great modern day leader. He entered the United States Army as a second lieutenant in 1958 after receiving his BSci degree in geology from the City College of New York where he had joined the ROTC. In 1979 he became a general with the award of his first star (brigadier general) and has sense served this country as National Security Advisor for President Ronald Reagan, Commander of the U.S. Army Forces Command, Chairman of the Joint Chiefs of Staff under Presidents George H.W. Bush and Bill Clinton, and Secretary of State under George W. Bush. He was the first African American to serve on the Joint Chiefs of Staff, and the first African American to serve as Secretary of State. (Colin Powell) Clearly Mr. Powell is a highly accomplished leader, and he demonstrated a strong focus on both results and people – and linking them both to purpose. With respect to purpose, he said, “Leaders must embed their own sense of purpose into the heart and soul of every follower. … Great leaders inspire every follower at every level to internalize their purpose, and to understand that their purpose goes far beyond the mere details of their job (Powell and Koltz 24-25).” In other words, it is the leader’s responsibility to communicate the purpose, or cause, to the team and inspire each individual team member to adopt this purpose as their own.

Regarding results Mr. Powell states, “To achieve his purpose, a successful leader must set demanding standards and make sure they are met (Powell and Koltz 25).” This is obviously a strong results driven approach. It is an admission that if high standards are to be met, they first must be set. And setting the standards isn’t enough. There also must be a strong sense of accountability to those standards.

But Mr. Powell also demonstrated a strong focus on the people. Not only did he recognize the need to help every team member personally adopt the purpose, but he knew how important each team member was to the standards. “Standards must be achievable (though achieving them will always require extra effort), and the leaders must provide the means to get there (Powell and Koltz 25) [emphasis mine].” In other words, the leader is the servant to the team, in the sense that the leader is responsible for providing the means to achieve the objectives. He also said that “everything you do as a leader has to focus on building trust in a team. Trust among the leaders, trust among the followers, and trust between the leaders and the followers. And it begins with selfless, trusting leaders (Powell and Koltz 76) [emphasis mine].” For a leader to be able to build a team that trusts one another he must first demonstrate that he is trustworthy, and that he trusts his team. This requires the selfless action of a servant leader.